Maven was bitten or had an accident that left a wound on her tail about a week ago. The wound seemed to be healing well, and Maven ate and played as usual. Directly after the accident she did not want to go out for a while, and she was depressed, so we assumed that she had a quarrel with one of the cats from the neighbourhood.

Maven was bitten once before and behaved exactly the same as now – being depressed for a few days, staying inside.  That wound she got back then was on one side of her abdomen. We freaked out and took her immediately to the pet hospital, but they said that she would be fine, and no medications were needed. That wound indeed did heal on its own (we only drained the abscess a few times). That happened about a year ago. 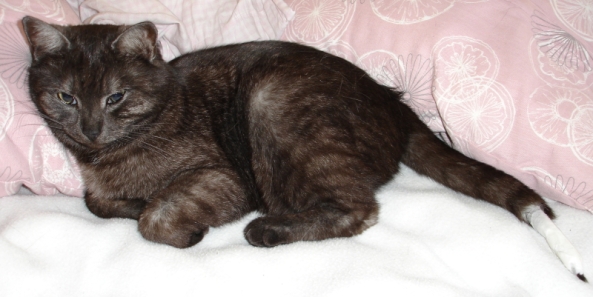 Two days ago we checked the tail to see how this new wound was healing, removed the crust, and it was bad, really bad. It looked okay on the surface of the crust, but actually it was infected and now we could see the bone. We took propolis drops and put it on the wound that we previously washed clean and then bandaged it. We took Maven to the veterinary this morning.

Today the skin got closed around the bone and it looked much better than on Saturday. The veterinary did not know what propolis was, but she was open to whatever might help the kitty get better and save her tail. Usage of propolis in Sweden is, surprisingly, relatively new to the most. Few years ago I had to buy it abroad, but now I can find it here.

Maven got some fresh bandages, antibiotics, and a painkiller shot (the nerves are not damaged, luckily, but she has pain). If her tail heals within a week, the top 5 cm will not be amputated. Poor Maven! Thanks to the propolis drops, we avoided an amputation today. If the vet only saw how it was on Saturday…

She is resting now. Maven was sedated, but not sleeping, during the examination and is still a bit disoriented and shaky. I petted her a lot and she got some juicy canned tuna recently (she was so hungry; because of the possible operation and sedation, she did not eat since last evening, and then a few hours after we came home, so she would not choke on food while reflexes are still a bit slow)!