It seems that Mom gave up on torturing me.

There is always this new, really tasty food out, and I can eat as much as I want! Yum, yum! I still get Tasteless Mud few times a day as well, but it is actually not that bad (or I got used to it). I love my Mom and Dad, they are not that unreasonable after all.

Mom said that I am the best cat in the world and such a good example for The Little One. Then she put me and the baby in the cage and Dad drove us to a place I had never visited before. It was a huge hall with hundreds of other cats and even more people. The Little One was scared, but I was just curious. I wanted to walk around and inspect the place. Mom put me and the baby in one big cage, arranged everything like a little room for cats, with a cat house and curtains and a litter box. We got food and water, too. It was good. I could see many other cats from there and when I told my humans to take me out and carry me around so I could see more, they obeyed.

I liked being there. People came to me and admired my beautiful face and eyes, said how pretty and cool I was. I liked that not many stupid people were there. Mom took me to a lady with white hair that called me ‘Big Boy’ and everyone laughed. She said many good and true things about me, except for one – that my head could be bigger. Mom petted me later and told Dad that that was a nice way to say that I was fat: “He is not big, it is his head that is small”. I do not care, small head or not, I am the King.

In the afternoon we went home just to go back to the same place the next day.

The Little One was less scared the next day. She looked at me, and also, at her Dad who was there as well, and imitated my royal posture and utter coolness. A new lady judged our good looks this time, and she also called me ‘Big Boy’. She did not complain about my head (except for my ‘somewhat flat forehead’. Ha! SHE had a flat forehead!), and she also told me many nice things. My humans carried me around again and I saw many cats of different races I never saw before. People came to Mom and asked about me and were surprised that it was my first time on a cat exhibition ever; I was so relaxed and cool. Yes, what did they think. I am cool. Like, the coolest cat ever. 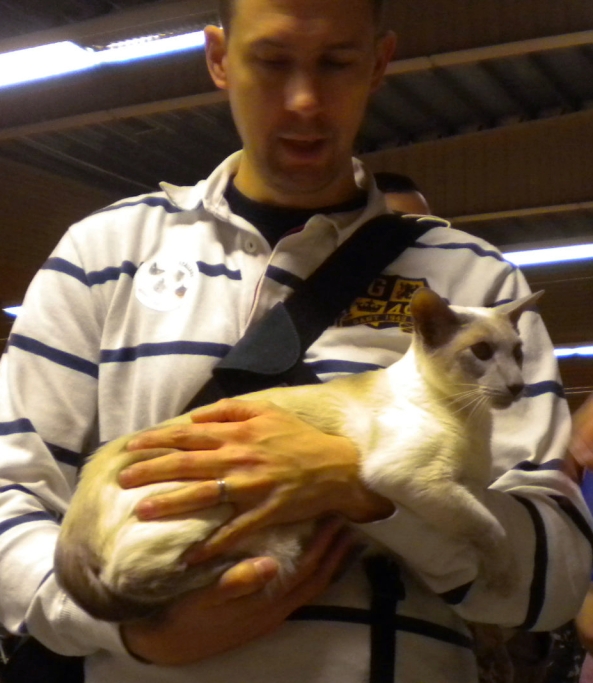 Leroy: “Carry me around! Show me the world!”

We were never that interested in exhibiting our cats; that takes a lot of time and also, cat shows are beauty pageants and for us our cats were already the prettiest in the world anyway! Our kittens’ dad Goofy has a title, he is a GIC (Grand International Champion, which is high title), but we would have liked him all the same even if he was not.

Until a few years ago, and even now sometimes, there have been cats that got sick on exhibitions and some of the breeders had to stop with breeding completely after getting cats sick for life. I was very scared of that. But now, everyone is cleaning tables, cages and hands with alcohol and the cats are handled very cautiously, so the risk of getting some bug is very small. And of course, you cannot exhibit a sick cat and there is an obligatory veterinary check when entering the cat show. The infections are not that bad for big cats, but if you have small kittens at home, they can get really sick.

We did not plan to have any litter soon, so we decided to exhibit Claire, since white Siamese are rare, and that way people can get to see her.

When it comes to beauty – Albert and Jossan are our prettiest cats, but Albert is not fond of being lifted after his injury (I hope he forgets about it now when he is operated and fine), and Jossan is fertile and can get upset and nervous if she is close to male fertile cats, so I do not want to stress them.

Leroy is chubby, and Miii is caramel blue, not ‘ordinary’ blue (caramel is recognized in England, but not here in Sweden, so she would have to compete with the “true” blue Siamese and she would get low points for her fur color, which is not fair. They are not even the same color! Jossan and Miii’s grandfather was an import from England and had the same, amazing fur color, which is not that appreciated in Sweden). Maven cannot be exhibited, not because she is a mixed breed – there is a class for them, too; the reason is that she has a tail kink.

But, we did not want to take little Claire there alone!

And so we thought – Leroy, although chubby, is such a cool cat, and has a lot of charisma. That counts for something, right? So, we decided to take Leroy as a company for small Claire, and since he already was going to be there, he could compete in his class as well (class 10, neuters). And so we went to Birka cat club’s two-day exhibition last weekend. 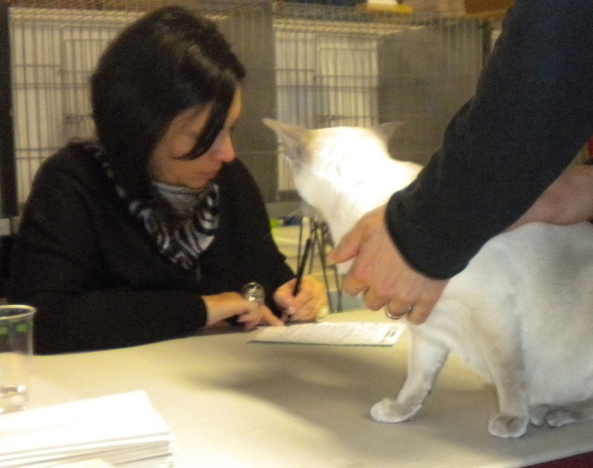 Leroy: “I am watching you!”

And Claire got two Ex1, which is the best she can get in her class, since she is only a junior. 🙂

Both judges said (in a very polite and nice way) that Leroy is a bit chubby, but also, that he is neuter and almost 6 years old, so some extra weight is not unexpected. Well, I am trying (still, in spite what he may be thinking) to get him slimmer! And not for the beauty reasons, but for his health.

Anyway, this is what they got as evaluation from the judges, on Saturday and Sunday. You’ll see, it is good! “Exc” and “Ex” stands for “excellent”. The ladies that judged our cats were very nice to them. Thank you! What matters the most to us is that the cats took being there pretty well, especially Leroy who enjoyed all the attention and was curious about the other cats.

Claire’s dad, Goofy, was also there and took two certificates (he is a neuter now). Claire met her dad for the first time and they sniffed each other and he also ‘petted’ her gently with the paw on her head. It was so nice to see that! They are similar in behavior and very friendly cats. 🙂